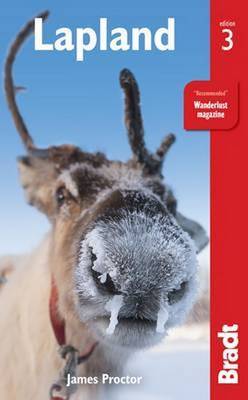 Now in its third edition, Bradt's Lapland is the only guidebook to this wintry wonderland. Spanning the northernmost fringes of Norway, Sweden and Finland, Lapland offers exciting winter and summer adventures. Take in the indigenous Sami culture, experience a husky safari or take a boat trip in search of killer whales. Scandinavia enthusiast James Proctor leads visitors across magical frozen scenery, from the world-famous ICEHOTEL and the stunning Laponia World Heritage area to the Arctic's midnight sun-24-hours of unbroken sunlight. Whether on an organized tour or travelling independently, Bradt's Lapland is the essential travel companion.

James Proctor is Bradt's very own Nanook of the North. For many people, the very thought of boarding a plane heading north is scary enough, but James actually chooses to spend much of his time above the 60th parallel. As the author of Bradt's Faroe Islands, Lapland and West Sweden guides, he's certainly used to snow, ice and howling wind! Yet, that is exactly the charm of the Nordic region - it's wild, it's unspoilt and it's relatively undiscovered. Planes that fly south are not really James's thing. James first came across all things Nordic as a student. After mistakenly wandering into a Swedish lecture, he soon realised that his native Yorkshire dialect, liberally laced with dozens of old Viking words, was going to make learning this off-beat Scandinavian language a doddle. And so began a love affair with Sweden, and indeed the other Nordic countries, which has endured to this day - 30 years or so later. As the BBC's Scandinavia correspondent in the 90s, James travelled widely across the Nordic countries and has since written no fewer than six travel guides to the region. Today he divides his time between the South of France, his beloved Yorkshire and his lakeside retreat deep in the Swedish forest.

PART ONE GENERAL INFORMATION Chapter 1 Background Information 3 Geography and climate 3, Natural history 5, History 8, Government and politics 15, Sami economy 15, People 16, Language 16, Religion and mythology 18, Culture 19 Chapter 2 Practical Information 21 When to visit 21, Highlights - and distances 22, Suggested itineraries 23, Tour operators 24, Red tape 26, Embassies 26, Getting there and away 26, Health and safety 27, Women travellers 29, Gay travellers 29, Travellers with a disability 29, Travelling with children 29, What to take 30, Money and banking 31, Getting around 31, Accommodation 33, Eating and drinking 33, Public holidays and festivals 35, Shopping 36, Arts and entertainment 37, Photography 37, Media and communications 37, Time 39, Cultural etiquette 39 PART TWO THE GUIDE Chapter 3 Swedish Lapland: Lulea to Riksgransen 43 Lulea 43, Arvidsjaur 50, Arjeplog 54, Northwest to Jakkvik and Vuoggatjalme 55, Jokkmokk 56, Gallivare 63, Kiruna 68, Icehotel and Jukkasjarvi 74, Abisko and around 78, Hiking from Abisko: the Kungsleden trail 82 Chapter 4 Narvik and the Islands 85 Narvik 85, The islands: Vesteralen and Lofoten 90 Chapter 5 From the Gulf of Bothnia to the Arctic Ocean 109 Tornio and Haparanda 109, Pajala and around 116, Muonio and around 122, Kaaresuvanto and Karesuando 124, Kilpisjarvi and Treriksroset 126 Chapter 6 Finnish Lapland: Rovaniemi to the Finnmark Plateau 131 Rovaniemi 132, Northwest from Rovaniemi: towards Kautokeino 142, Kautokeino 150, Northeast from Rovaniemi: towards Karasjok 154, Inari 160, North from Inari: Kaamanen and Utsjoki 164, East from Rovaniemi 171 Chapter 7 Norwegian Lapland: Tromso to Kirkenes 179 Tromso 181, Alta 193, Towards Hammerfest: Skaidi 199, Hammerfest 199, Towards the North Cape 204, The North Cape 208, Moving on from the North Cape: towards Kirkenes 211, Kirkenes 212 Appendix 1 Language 219 Appendix 2 Glossary of Finnish, Norwegian, Sami and Swedish terms 225 Appendix 3 Further Information 227